Archive for the ‘Vegetables’ Category 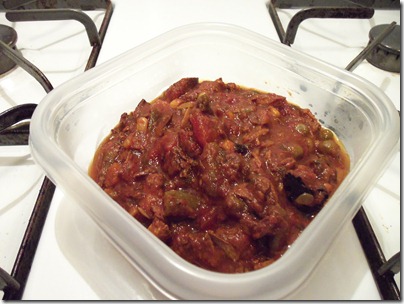 I was experimenting again!  I had some leftover chicken from my Roast Chicken* and was trying to think of something to do with it, that was also low-carb / Atkins friendly.

Scrounging around in the fridge, I found:

Most of a jar of green taco sauce;
Some sandwich peppers left in the jar, that my husband won’t be eating since he doesn’t take sandwiches in his lunch anymore;
A  bag of frozen mixed vegetables;
A partial bag of frozen yellow squash.

I threw it all together in a skillet, but realized it still needed something.  After my husband got home, we figured that some tomatoes would help.  So I bagged up dinner, stuck it in the fridge and a couple of days later we made it to the store.

A large can of diced tomatoes;
A medium can of tomato paste;
A package of pre-sliced mushrooms;
A bunch of cilantro.

I tossed everything in my crock pot, and let it simmer overnight.  It actually turned out pretty good!  We had it on low-carb tortillas, but I put it over rice for the kids.  I think it would also go really well over any kind of noodle – spaghetti, macaroni, etc.  I also topped it with some shredded Monterey Jack/Cheddar cheese combo we found at the store.

So, no beans and no chili sauce or powder, but it still had a chili sort of flavor.  According to my husband.

I got a few leftovers cleared out of the fridge in the process too.

*Actually, you can use any leftover chicken, or fresh chicken cooked, and cut into small pieces.  Just be sure to remove any remaining skin. 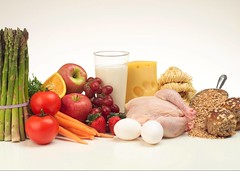 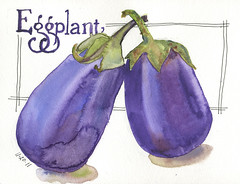